Many researches have been conducted so far to improve the bioactivity and mechanical properties of bioceramic-based scaffolds in order to stimulate tissue attachment to the implant surface and create a stable bonding. In this research, Al2O3 scaffolds were prepared using different types of polyurethane foam through template replica method and then, they were sintered at 1650 °C. A sol of SiO2–CaO– P2O5–MgO system Bioactive Glass (BG) was synthesized where the scaffolds were soaked and heat-treated at 800 °C based on thermo gravimetry analysis. X-ray diffraction confirmed the presence of silica in the structure of BG coating diffused in alumina scaffold that caused the formation of sillimanite phase. According to Scanning Electron Microscopy (SEM) analysis, all prepared scaffolds were highly porous, and the mean porosity percentage was approximately 85 %. The compressive strength and porosity percentage of the scaffolds nearly ranged between 0.35-1.75 MPa and 79-93 %, respectively. The sample with the best result of compressive strength was considered as the optimum alumina scaffold (OAS). In vitro acellular behavior of the samples was also evaluated followed by soaking them in the simulated body fluid, and the ball-like morphology including entangled needle-like crystals were observed on the surface of the sample. Moreover, cells were cultured in alumina scaffolds with and without BG coating and in the cell studies. According to the findings, both samples supported attachment and proliferation of osteoblasts. Therefore, Based on the scaffold porosity percentage which promotes cell attachment as well as the compressive strength which is close to that of the trabecular bone, it can be concluded that application of BG-coated alumina scaffold as a bone-healing material may be beneficial. 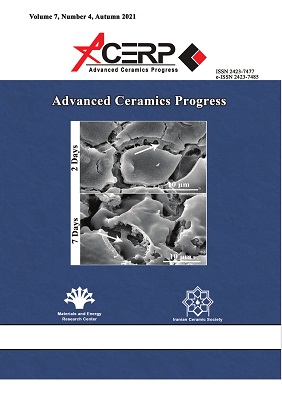