The main objective of the present study is to evaluate the mechanical properties, biocompatibility, and bioactivity behavior of scaffolds made of hydroxyapatite (HA)-modified by MnO2 and Palladium (Pd) for biomedical applications. Throughout the research, HA, MnO2, and Pd were developed using sol-gel and precipitation methods, respectively. The properties of the scaffolds were determined using Scanning Electron Microscopy (SEM), Energy Dispersive Spectroscopy (EDX), atomic absorption, and Brunauer−EmmeS−Teller (BET) method. To investigate the in vitro cell proliferation and alkaline phosphatase (ALP) assays, cell culture was done. Furthermore, the mechanical properties of the scaffolds were investigated before and after immersion in Simulated Body Fluid (SBF), and the interaction of Dental Pulp Stem Cells (DPSCs) with the nanocomposite scaffolds was assessed. The obtained results showed that the HA/MnO2/Pd scaffolds were characterized by higher compressive strength (35.72%), toughness (35.68%), microhardness (80%), and density (0.44%) than HA/MnO2/Pd filled by chitosan (CS) binder scaffolds. The biocompatibility properties indicated higher cell proliferation and ALP assay on the HA/MnO2/Pd filled by CS scaffolds than those of HA/MnO2/Pd scaffolds. 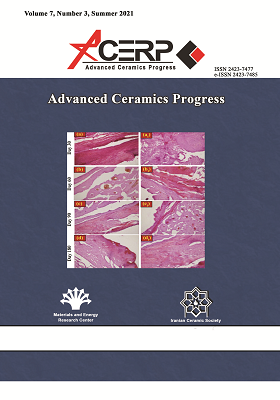